INDRA DEVI, WHO IS THE FIRST LADY OF YOGA?

matteo
Yoga-en-dx
No comments yet

Maybe you don’t know, but in modern times one of the most famous yoga teacher all over the world was Eugenie Peterson, better known as Indra Devi, the First Lady of yoga.

Indra Devi was born in Riga, the capital of Latvia. Her father was Swedish and her mother came from Russia. When the Bolsheviks came to power in 1917, she and her mother escaped in Berlin where Indra studied and then started to work as an actress and a dancer.

During her stay in Germany, she became really interested in India and of course in yoga’s discipline.

When she married a commercial based in Bombay, Indra met the famous guru Krishnamacharya who accepted her as a student and very soon she started to work as a yoga teacher in many different countries.

She travelled a lot, especially in China and United States, and taught yoga in many different situations: for example, in Shanghai she opened her school and, at the same time, she gave lessons in orphanages.

She also taught to many Hollywood’s vips like Greta Garbo, Gloria Swanson and Eva Gabor.

Her last journey was the trip to Argentina in 1985. Indra liked the country so much that decided to stay there for the rest of her life. In 1987, she was elected president of honour of the International Yoga Federation and Latin American Union of Yoga. 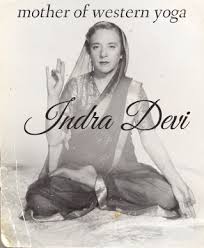